People own what they create 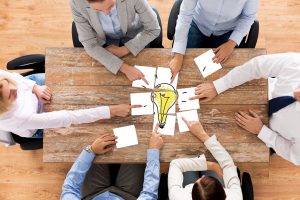 Given the choice would you rather implement someone else’s solution or one that you had created yourself? Which do you think you would have greater vested interest in?  If you’re anything like me, I think you would say the latter.  Recently I shared an overview of my six principles of delivering change at pace – in this post I focus on the fourth principle ‘people own what they create’.

The concept that people own what they create is nothing new.  Kurt Lewin, a German-American psychologist who influenced much of our thinking of change in organisations, proved over 70 years ago that self-directed work teams outperform their peers.  This concept is also at the heart of the latter-day work of The Corporate Rebels who are on a mission to make work more fun (that gets my vote!).  Lewin’s work at the Harwood Pyjama Factory in 1939 turned around an under-performing facility such that productivity was on average 25% higher than the sister factory where no such intervention occurred.  In some teams, it was over 50% higher.

So, what did Lewin do when he visited Harwood’s new manufacturing plant in Marion, Virginia?

The first thing Lewin discovered was that the plant had over 300, mostly female employees and it was intended to be the company’s primary manufacturing facility.  The employees were new to the work, and whilst keen, their pace was slow and productivity was low compared to other sites.  There was also high turnover of staff.  The company saw the problem as the quality of the staff it had hired but Lewin was more interested in how the staff felt and were treated.

Lewin sat and talked with staff about how they did their work – he found the same job was being done in multiple ways.  He initiated small group discussions about how performance rates might be improved.  Where the rates were simply discussed there was a slight improvement but when the groups identified and voted on how they might improve then the change was significant.  Production increased from 75 units to 87 over a five-day period and then was increased further to over 90 units.  None of the control groups monitored at the same time showed any significant improvement.

So, Lewin showed us, many decades ago, that involving people in designing their own change is highly productive.  Is it any different today?  I think not.  I regularly hear clients say that they want to ‘co-create’ solutions but my question is always ‘so are you ready to let go of the need to control and trust your people to create the best solution?’  To do so requires they not only empower staff, but support and coach them.

Lewin believed as do I, that theories should be practical, directly relevant and useable in everyday life.  So, what can we learn from Lewin’s insight?  Here’s four steps to consider:

One cautionary note for you – I find I am curiously sensitive to the use of the word ‘rollout’ of change.  The term, for me, can signal an inevitable failure mode for a change project.  Why?  Well, when confronted by the need for change, the usual way is to mobilise a central, typically head office team to diagnose, design and ‘rollout’ a solution along with communications to secure ‘buy in’ (why? because they’re selling!)  Resistance is inevitable, be it active or the passive ‘keep your head down and it may pass you by’ variety.  I prefer to use the term ‘engagement’ rather than rollout.

As Lewin said, ‘If you truly want to understand something, try to change it’ – my question for you is simple, how might you adjust your practice to one that helps the people you work with solve their own problems rather than trying to fix them yourself?

I am curious to hear your thoughts, so please feel free to email me at jacqui@changepaceconsulting.com. If you want to sign up for my future blogs please register here.

Jacqui Alexander is an expert in business transformation with a proven track record of helping organisations align, deliver and improve their performance.  She uses an innovative and blended approach that combines the practices of organisation development, continuous improvement and project management to improve ways of working.

Her approach is particularly impactful when shifts in mind-set, culture or ways of working are imperative for business success.  She runs London-based consultancy, ChangePace Consulting Ltd.